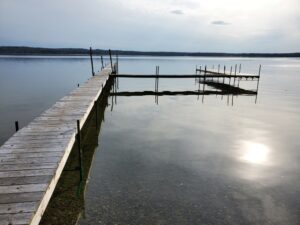 The dock is in!
(photo credit Jeff Hunter)

In the late spring, Chautauqua Lake – our lake — can be moody.  Sometimes it is still frozen in mid-April, and snowstorms can kick up in between the sixty-degree days.  Ice and snow pile up on the Chautauqua lakefront. Some days after it has thawed the wind howls and the waves are rough.  Other days, hard snow falls horizontally and the cold bites through the thickest down clothing. 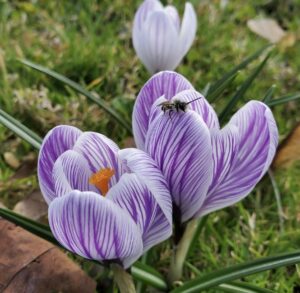 We marvel at the green stuff that is underneath the winter snow, and take photos of grape hyacinths, daffodils, snowdrops, trout lilies and trillium as they emerge.  We take photos again as they get a good dusting of snow.  Osprey and eagles lay their eggs and keep the hatchlings warm.  Buffleheads, the tiny black and white ducks, return along with loons, the mergansers with their crazy hairdos, and all sorts of other migratory waterfowl.

When the ice melts and the winds die down, there isn’t much that is more peaceful than walking along the Chautauqua lakefront or sitting on an old porch watching the world drift by. The sun casts long shadows on the lawn and makes diamonds on the surface of the water.  At dusk, colors explode into pinks, purples and oranges.

Changing Seasons on the Chautauqua Lakefront

Here it is again – April — and we are having a respite after a lot of wind, rain and snow.  April can be the cruelest month, promising spring but sometimes stingy to deliver. But today, April serves up a warm afternoon to walk with the dog and sit by the newly installed dock.  Usually restless and anxious to explore, on this day the dog stretches out and relaxes in the sun.  The little burst of warmth caused the dandelions to open their buttery faces and we can hear the buzzing of the bees as they fly from flower to flower.  The bees have awakened.

We walk by a pair of mallards paddling in the local frog pond and watch two pair of goldeneye ducks as they take turns diving for food.  A loon calls from off in the distance while a fat little vole scampers from his precarious shelter inside the firepit, onto the grass and back again.  The firepit is filled with fuel in preparation for the first bonfire of the season.  It will happen soon. 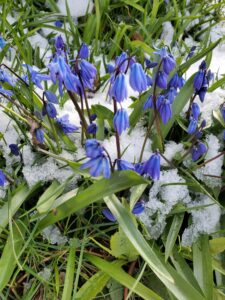 A dusting of snow in spring
(photo credit Jeff Hunter)

No matter the time of year, the sight of Chautauqua Lake lifts the spirits.  Catching the view of both the north and south basins from the bridge on the way to the grocery store turns a simple errand into a gift. Watching it flash through the trees driving around the north basin on Route 430 to breakfast, to play a round of golf, or to attend an event at the Chautauqua Institution is unforgettable.  The day when the dock goes in on the lakefront at The Maple Springs Lake Side Inn is a special day indeed.  It is a symbol of faith that summer will come.

Until that time, perhaps the best way to experience the Chautauqua lakefront it is to do what we did today.  Stand by it and take a moment to soak it in.  Sit for a while and listen.  Stay longer than you planned. Stand by the peaceful waters.